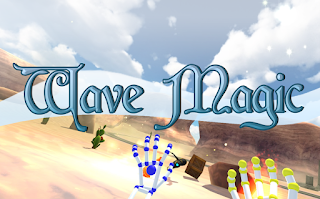 After posting the first playable demo for Wave Magic Alex from Leap Motion contacted me and had it uploaded to their gallery and featured in today's newsletter. You can download and play the latest version here:

Updates are now also being posted to the game's Facebook pages here:

Changes:- Added "Wind Bomb" Spell, a mid range spell that damages enemy in a small area of effect.
- Added "Fast Shooter Enemy", a harder ground ranged enemy that won't spawn until you have survived for a while.
- All enemy's now have idle sounds to help indicate where they are.
- Fixed bug where particle effects on hands would sometimes not disappear.
- Moved enemy spawners to be closer to one side of the arena.
- Edited scenery in the Desert map
- Made aim assist on Fireball stop seeking after it passes its target.
- Adjusted menu position.
Posted by Anthony Graceffa at 2:24 PM